Charles Darwin, a Monkey, and Some Snuff 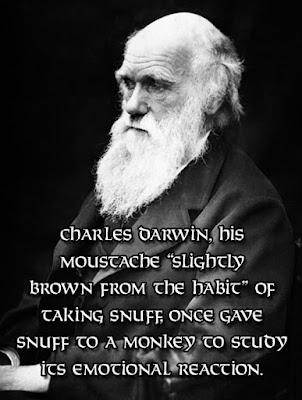 Charles Darwin used snuff as a stimulant while working.  He once game up snuff for a month, and described himself as feeling “most lethargic, stupid, and melancholy.”

His moustache “slightly brown from the habit” of using snuff, Charles Darwin administered snuff to a monkey in order to study its emotions. “It closed its eyelids whilst sneezing; but not on a subsequent occasion whilst uttering loud cries,” he recorded.

Darwin's son wrote this about his father and his snuff-taking:


Our former neighbour and clergyman, Mr. Brodie Innes, tells me that at one time my father made a resolve not to take snuff except away from home, “a most satisfactory arrangement for me,” he adds, “as I kept a box in my study to which there was access from the garden without summoning servants, and I had more frequently, than might have been otherwise the case, the privilege of a few minutes’ conversation with my dear friend.”

He generally took snuff from a jar on the hall table, because having to go this distance for a pinch was a slight check; the clink of the lid of the snuff jar was a very familiar sound. Sometimes when he was in the drawing-room, it would occur to him that the study fire must be burning low, and when some of us offered to see after it, it would turn out that he also wished to get a pinch of snuff.