Why Some Snuff Boxes are Shaped like Women's Shoes...

If you google vintage or antique snuff boxes, you find quite a few of them that are shaped like women's shoes.  And so this begs the question, why did the Victorians use shoe-shaped snuff boxes?  For those of us living in modern times, it seems like an odd choice. 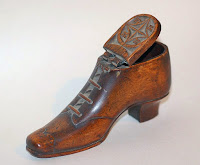 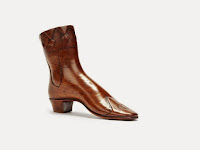 When I decided to dig into this question, I was amazed at the number of different theories there were, and how diverse they were.  Here are a couple of theories that you will hear from time to time, that I believe to be incorrect.

1.  That because most of them are shaped like women's shoes, the snuff boxes must have all belonged to women, because "women seem to like shoes."  This as we will see below, is incorrect.  In actuality, men owned these shoe-shaped snuff boxes, and they were not relegated to women.

2.  One source suggests that the shoe is a symbol in Freemansonry, and that many shoe-shaped snuff-boxes are decorated with masonic symbols.  While some of these snuff boxes do have masonic symbols on them, most of them do not.  Freemasons decorate all sorts of things with their symbolism, so of course some of them decorated their snuff boxes in this way.  While the shoe is a symbol in Freemasonry, shoe-shaped snuff boxes did not originate with the Freemasons.

3.  The same source from #2, also suggested that in the Bible the shoe symbolizes the earthy in contrast with the holy, and thus the shoe-shaped snuff box was a reminder that snuff taking was an earthly vice.  There is no reference to this in any other source that I could find, and as we'll see below the shoe symbolizes many more things than the "earthly."

4.  Its been suggested that Victorians were a little obsessed with catching a glimpse of a woman's shoe and ankle, and therefore identified a woman's shoe with something a bit naughty or illicit.  And thus, what better shape for a man to offer another man a pinch form, than a somewhat illicit woman's shoe.  While this is true, there is more to it than that.

So, let's build on this last one and give as complete an answer as is possible. 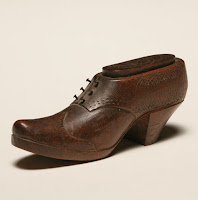 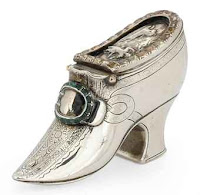 The shoe is symbolic of good-luck, it has romantic connotations, and specific it has symbolic connections with weddings and travel.  So in the 18th and 19th centuries, a shoe-shaped snuff box was often given as wedding gift or as a gift to a traveler to bring them good luck.  There was a novelty aspect to making many different Victorian objects in the shape of a shoe, and the snuff-box was just one of these objects.  If you enjoy history, then you may enjoy some additional information.


Shoes are more than just a depiction of footwear here. The shoe is a romantic symbol that has been with us a long time. In the middle ages, a father would hand the bridegroom a shoe to transfer the authority he had over his daughter to her husband. Today, we tie shoes to the bumper of the honeymoon car.  Shoes and Eros are soul mates: Fetishists adore shoes as symbols of the female sex. In the Victorian age, the peek of a shoe from under the all encompassing, many layered skirts could arouse a passionate interest. Cinderella loses her shoe and it leads the prince to her, the 12 Princesses dance holes in their shoes and finally, there's Puss in Boots!

Shoe- shaped snuff boxes were commonly made throughout the 18th and 19th centuries. Traditionally associated with good luck wishes, they were given as gifts for travelers and wedding couples setting off on the "journey" of marriage. (Source)

And some additional information from another source:


Shoe and boot shaped snuff boxes were made throughout the 18th and 19th centuries. Shoes have long been associated with love and marriage and were often given for good luck.  (Source) 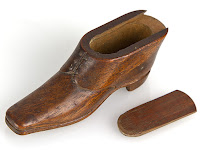 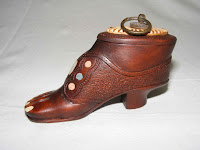 I enjoy this sort of historical mystery, so let's go a bit deeper.  In "A History and Price Guide to
Miniature Shoes," Zita Thornton has this to say:


Modern, ornamental shoes made from porcelain or resin, have become a collectable favourite in the last few years. However, a fascination with miniature shoes goes back thousands of years. Miniature sandals have been found in Egyptian tombs and fashioned from ancient Persian pottery.

When shoemaking became a highly skilled, decorative craft in the seventeenth century, shoe makers expressed their skill in miniature too. Until the nineteenth century, miniature shoes, as exquisite in their detail as their full sized counterparts, became tokens of prosperity and love and symbolised a desire to share worldly goods, hence the tradition of hanging boots on the back of a newly wed's car.

The emergence of porcelain brought the fashion to aristocratic circles when elegant but expensive porcelain or enamel versions were exchanged. In the nineteenth century the love of novelty encouraged the manufacture of miniature shoes in a wider variety of materials such as leather, wood and brass and brought the custom within the reach of sentimental Victorians of all classes. The less sentimental looked for a function in their ornamental shoes and in this they were continuing a tradition that had its roots in ancient times. The Romans had oil lamps shaped as a foot in a sandal, and perfume containers as hob nailed boots. An ancient ancestor of the stirrup cup was a drinking vessel called a rhyton, which was sometimes made in a boot shape. Victorian gentlemen had shoes fashioned as gin flasks, umbrella handles, paper knives and ink wells, as well as all the paraphernalia associated with smoking and snuff taking such as snuff boxes, match holders, tobacco jars, ashtrays and pipe stops. 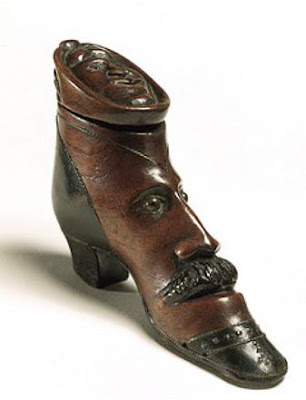 The snuff box on the right is an interesting example.  And the following information is from the webpage from which I borrowed the image for this discussion.


This snuff box was owned by the artist Talbot Hughes (1869-1942), who had a large collection of historic dress and accessories. The London department store Harrod's bought the collection and gave it to the Museum in 1913 after displaying it in the store for three weeks.

Shoe-shaped snuff boxes were made throughout the 18th and 19th centuries, probably as gifts. This boot, with its squared toe, is in the fashion of the 1860s. Shoes were traditionally associated with good luck wishes for travellers and wedding couples setting off on the 'journey' of marriage. Silver-coloured shoes are still sometimes used at weddings as good luck tokens.

So, that is definitely my longest blog post thus far.  I've been intrigued with the shoe-shaped snuff boxes since the first time I saw a picture of one.  They seem odd at first look, but with a little consideration of their symbolism and historical meaning, they tell an interesting story from the history of snuff-taking.

To see a photo album with lots of shoe-shaped snuff boxes, Click Here.