St. Philip was a Heavy Snuff-User 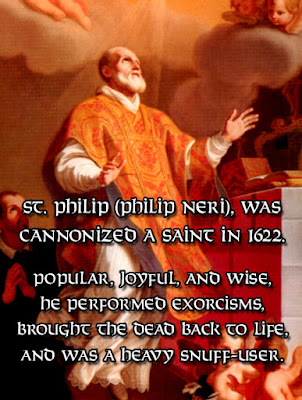 A fair number of Catholic Saints were snuff-takers.

During the beatification investigation of Philip Neri, to determine if he would be made a Saint, the man's snuff use became an issue.   An examination of Philip Neri's corpse during the investigation showed that the soft tissues of his nose had gone (he was 79 when he died) and so his body was not incorruptible. It was suggested that this was due to his heavy use of snuff.  Despite this set-back, Philip Neri was canonized a Saint in 1622.

As far as Saints go, Philip's story is pretty interesting.  During an exorcism he forced a demon dog out of a woman, and when it ran at him, he threw a mace at it causing it to flee.  This was a man of action.

Another time, a boy was drowning, and Philip "bi-located" right next to the boy in the water and drug him to shore.  While praying, Philip was so filled with love that his heart expanded breaking two of his ribs!

Another time, a young prince had died without making confession.  Philip put holy water on the prince's lips, brought him back to life long enough to make his confession, and then let the boy slip away again.

Whether religion or saints are your thing, everything I read about Philip suggested he was a very good man at a time when good men were somewhat rare in the Catholic church hierarchy.  I think snuff-takers can be proud this gentleman was one of us.

Mark Stinson
Modern Snuff Website
Posted by ghostvigil.com at 7:23 AM