Frederick the Great Was Saved by his Snuffbox 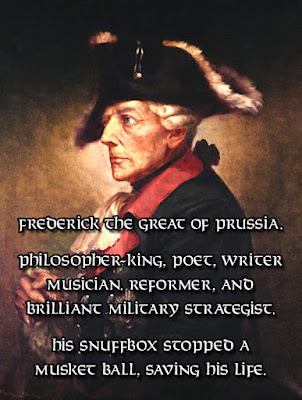 Frederick the Great ruled Prussia from 1740 until his death in 1786.  Frederick aspired to embody the Platonic ideal of a "philosopher-king."  He was a poet, a writer, a musician, a domestic reformer and a brilliant military strategist.

Frederick led his nation through multiple wars with Austria and its allies. His daring military tactics expanded and consolidated Prussian lands, while his domestic policies transformed his kingdom into a modern state and formidable European power.  He was an enthusiastic patron of the arts and sciences, and corresponded with the top minds of the Enlightenment.  He had a long and sometimes contentious friendship with Voltaire.

Frederick The Great used snuff, especially under the stress of command. Once a musket balll hit a snuff box in his breast pocket, saving his life!

The cynical temper of Frederick the Great is well known. Once when his sister, the Duchess of Brunswick, was at Potsdam, Frederick made to the brave Count Schwerin the present of a gold snuff-box. On the lid inside was painted the head of an ass. Next day, when dining with the king, Schwerin, with some ostentation, put his snuff-box on the table. Wishing to turn the joke against Schwerin, the king called attention to the snuff-box. The Duchess took it up and opened it. Immediately she exclaimed,' What a striking likeness! In truth, brother, this is one of the best portraits I have ever seen of you.' Frederick, embarrassed, thought his sister was carrying the jest too far. She passed the box to her neighbor, who uttered similar expressions to her own. The box made the round of the table, and every one was fervently eloquent about the marvelous resemblance. The king was puzzled what to make of all this. When the box at last reached his hands, he saw, to his great surprise, that his portrait was really there. Count Schwerin had simply, with exceeding dispatch, employed an artist to remove the ass's head, and to paint the king's head instead. Frederick could not help laughing at the Count's clever trick, which was really the best rebuke of his own bad taste and want of proper and respectful feeling.