The Marie Antoinette Most of Us Don't Know 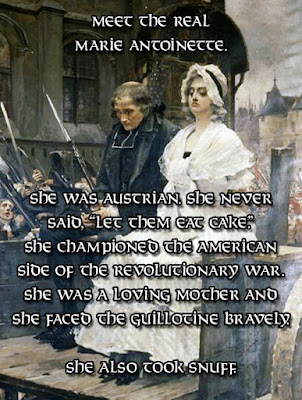 In the 18th century giving a snuff box as a present became a sign of exalted gift-giving.  Marie Antoinette had fifty-two gold snuff boxes in her wedding basket.  While this may seem extravagant, it should be remembered that in the eighteenth century the snuff box was the equivalent of jewellery and not only did the snuff box change with artistic fashion but anyone who was anyone needed to have a variety of these boxes.

What most people think they know about Marie Antoinette is actually false.  She was originally Austrian. She never actually said, “Let them eat cake.”  She was a champion of the American
side of the Revolutionary War, and without her efforts the war might have ended quite differently.  After the French Revolution, none other than the American revolutionary Thomas Paine (at that time part of the French Legistlature, as strange as that sounds) advocated exile for the Royal Family to the United States, rather than death.   Marie Antoinette was a loving dedicated mother, and she faced execution by guillotine bravely.  Marie Antoinette also took snuff, though it is said she was more likely to carry a box of bon bons on her person, than a snuff box.

She may have also standarized the modern handkerchief as we think of it today.  The handkerchief has a long history as a piece of cloth carried to clean one's nose.  But, prior to the triumphant arrival of tobacco (specifically snuff tobacco) in Europe, the handkerchief had become an object of fashion.  Snuff brought the handkerchief back to its original purpose, as it became indispensable for cleaning snuff-stained noses! White handkerchiefs were hardly suitable for this and people took to using large, coloured kerchiefs to hide the stains.  Up until this time, the handkerchief had come in many shapes, such as round, square, triangular, etc.  According to legend, one day Marie Antoinette at Versailles remarked that the square-shaped handkerchief was the most pleasing as well as convenient. This prompted Louis XVI to make it mandatory for all handkerchiefs produced within the kingdom to be  square in shape.  And the rest, as they say, is history...

Mark Stinson
Modern Snuff Website
Posted by ghostvigil.com at 6:30 AM